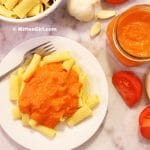 Rich and creamy, this roasted tomato sauce is also vegetarian, vegan, and gluten-free.

Peel onion and chop into large pieces, roughly the size of the cut tomatoes.

Peel cloves of garlic and either smash cloves with knife or cut each clove into 2-3 pieces.

Add garlic to pan, as well as olive oil, salt, and pepper.

Toss together until tomatoes, onions, and garlic are coated with oil and spices.

Place pan in 400 degree oven and roast for 20-25 minutes, tossing veggies occasionally. You’re looking for the tomatoes, onions, and garlic to be super soft. (I like to roast mine until some charred edges appear on the tomatoes and onion in the pan.)

Remove from oven and let cool to room temperature.

Your roasted tomato mixture should have lots of liquid in it. If your tomatoes weren’t juicy and the veggie mixture is thick, stir in 1/2 cup of broth.

Place the mixture into a blender, and puree on high until a creamy consistency has been reached. (If you're mixture is too thick to blend, add another 1/4 cup of broth.)

Store in the refrigerator.