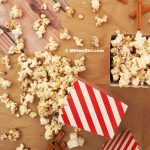 Buttery kettle corn with a sprinkle of cinnamon cooked right into the popcorn! It's highly addictive and a delicious sweet treat for your next movie night.

Place butter in a small bowl and microwave in 10 second intervals until the butter is melted.

Get out a large bowl and set it aside.

Place the oil and popcorn kernels in a large pot over medium-high heat.

Put a lid on the pot and cook for 1-2 minutes until popcorn kernels begin to sizzle in the oil but have not yet started to pop.

Sprinkle the sugar and cinnamon over the kernels. Give it a quick stir to combine.

Put a lid on the pot.

Swirl the pot without lifting it from the stove until kernels start to pop.

Let the popcorn pop until there’s 1-2 seconds between pops. IMMEDIATELY remove from heat.

Remove the lid and IMMEDIATELY pour popcorn into a large bowl.

Drizzle with melted butter and sprinkle with salt.

Toss the popcorn to combine.