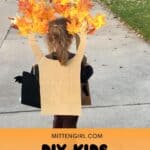 The making of my daughter's tree costume.

“Momma, I want to be a tree for Halloween.”

My then three year old made this declaration early in September. And since kids can change their minds 101 times a week, I really didn’t think it would stick.

And then it grew.

“I’m going to be a tree with yellow leaves for Halloween,” my daughter announced to her pre-school teacher, who in turn asked me if I was aware of kiddo’s costume plans.

“The tree part, yes. But the yellow leaves are new,” I told her.

We were into October at this point, so I started googling. Etsy... Amazon… someone had to have a tree costume. But unless she wanted to be a Christmas tree, there was no pre-made tree-with-yellow-leaves costume to be ordered.

Which means I’d have to make it.

I don’t have the talent to make an amazing paper mache tree. And we were in the midst of potty training, which means the ability to get in/out of the costume fast was super important. Plus she’d be walking around a neighborhood and climbing porch steps for trick or treating. And playing games in her costume at the fall school carnival.

Ugh. Why on earth does she want to be a tree with yellow leaves?!?

Inspiration came in the form of a giant box.

What if the tree trunk was made from cardboard, and worn sandwich-board style?

I measured my daughter, cut apart the biggest box in our garage, sketched a tree trunk with branches on it, and got cutting.

It worked! But it looked… well, like someone with limited drawing skills tried to cut a tree shape out of cardboard.

Shopping for a Tree Costume

Off to the craft store for supplies. But what, exactly... Paint? Nope, I’m not talented enough to paint anything resembling tree bark. And what about the leaves? And how exactly am I holding the front and back together?

I don’t know how long I wandered around the craft store, but I discovered that:

I left the store with a bag stuffed full of tree-making materials and the good luck wishes of an incredulous sales associate who couldn’t believe that this was my three year old’s Halloween costume desire.

How to Make It

I found out that the cardboard branches I made weren’t strong enough to hold lots of fabric leaves and a TON of hot glue.

Another trip to the craft store and I had what looked like giant, wooden tongue-depressors to fortify the branches and keep them from flopping over.

I made shoulder straps out of the felt.

Then, I added some felt side pieces to keep the tree from sliding off of her and attached them to the tree trunk with velcro so that we could easily pop her out of her costume for the inevitable bathroom dash.

Next I added more and more yellow leaves. The garland I had found even had some glittery, gold leaves on it - much to my daughter’s delight - so those went on too. And what came together was pretty great.

Here's the final list of supplies I used to build my kiddo's tree costume:

She played the school’s fall carnival games in her costume.

And getting it on and off was a breeze.

Halloween was a gorgeous, warm fall night in Michigan.

(Thank goodness, because the one thing that never occurred to me in all of this was that snow or rain could destroy a cardboard costume in minutes.)

And trick or treating was a success.

This year she wants to be a ghost.

Fantastic! Let’s google ghost costumes and see what we can order up.

“No, Momma. I want you to make my costume again.”

Back to the craft store I go.

Join my email list and get my 5 CLASSIC COCKTAILS EBOOK sent to you immediately!