Disclaimer: This post contains affiliate links. If you make a purchase using one of these links, I make a small commission.

Prickly pear liqueur is sweet with a slightly floral flavor and is often used in bright, citrus cocktails like margaritas. This Prickly Pear Cinnamon Gin cocktail brings that floral flavor into fall with the perfect balance of citrus and spice.

Note: This post is sponsored by Thatcher’s Organic Artisan Spirits, a West Michigan-based company crafting organic vodka and liqueurs. All thoughts and opinions are my own.

Did you know we have prickly pear cactus in Michigan? The Eastern Prickly Pear is a native plant that survives our winters and comes back each year. Mind blown!

This summer, a gardening savvy friend even gave me a cutting of theirs to attempt to grow in my garden. (Fingers crossed it survives its first winter in my care. My green thumb is random and accidental.)

Prickly pear liqueurs, though, aren’t always an easy find in Michigan so I was delighted when Thatcher’s Organic Artisan Spirits reached out and asked me to create a new cocktail recipe using their Michigan made prickly pear liqueur. And because when you work with local cocktail ingredients, you can find them, well… locally, I was able to easily find Thatcher’s Prickly Pear liqueur at my fave West Michigan liquor store.

Prickly pear is a great flavor pairing with lime and silver tequila, but we are not making prickly pear margaritas here. I did use Thatcher’s Prickly Pear liqueur in a margarita - and it is DELICIOUS - but something else kept sticking in my mind. Cinnamon.

Every time I sipped or sniffed the liqueur, I kept coming back to cinnamon. Not cinnamon and nutmeg. Or cinnamon and ginger. Just cinnamon, in all its spicy glory.

Pairing Prickly Pear Liqueur with my apple cinnamon infused gin creates the perfect fall sip without the cinnamon being too spicy or the prickly pear being too floral. Head's up - the gin does need to be started about 5 days ahead of crafting your cocktail. It's a quick infusion to set up and I promise it’s worth the wait!

How to Make a Prickly Pear Fall Apple Cocktail

Infuse your favorite gin with apples and cinnamon. >Get the instructions for my DIY Apple Cinnamon Gin. I use Beefeater Gin or Aviation Gin in my infusion since both are fairly neutral tasting spirits.

Shake Up Your Cocktail

Shake well and strain into a coupe glass.

Garnish with a slice of apple or a lemon peel, if desired.

Where do I find Prickly Pear Liqueur?

Head to the Find Us page on the Thatcher's Artisan Organic Spirits website and use their search tool to find the store nearest you!

Do I have to use the apples in the apple cinnamon gin?

Yes! In testing this recipe, I infused the gin 2 ways - cinnamon + gin + 2 day infusion AND cinnamon + apples + gin + 2 days cinnamon infusion and 5 day apple infusion. You can not short cut this one. Turns out the apples are needed to control the intensity of the cinnamon, especially since we’re using cinnamon sticks and the exact size of each one will naturally vary. Using the apples is the best way to keep the cinnamon from taking over.

Can I use bottled lemon juice?

Squeeze a fresh lemon for this recipe. It’s one of 4 ingredients, so fresh juice makes for the best cocktail.

Where do I find simple syrup?

Make your own simple syrup by combining 1 cup of hot water with 1 cup of sugar. Stir until dissolved, then put the mixture in the refrigerator until it’s cold. Don’t use it until it’s well chilled or the warm syrup will melt your ice too much when you shake up your cocktail! Any leftover syrup can be kept in a covered jar in the refrigerator for up to 3 weeks.

Try These Other Fall Cocktails 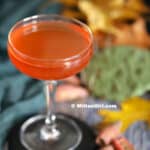 Prickly pear liqueur is sweet with a slightly floral flavor and is often used in bright, citrus cocktails like margaritas. This Prickly Pear Cinnamon Gin cocktail brings that floral flavor into fall with the perfect balance of citrus, spice, and floral ingredients.

Shake well and strain into a coupe glass.

Garnish with a slice of apple or lemon peel, if desired. Join my email list and get my 5 CLASSIC COCKTAILS EBOOK sent to you immediately!