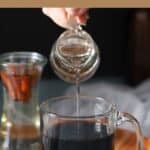 Disclaimer: This post contains affiliate links. If you make a purchase using one of these links, I make a small commission.

This easy cinnamon simple syrup recipe is the perfect addition to your morning coffee or shaken into a holiday cocktail.

You can mix up this cinnamon sweet syrup with just a few simple ingredients and a few simple steps. Homemade Cinnamon Simple Syrup is ideal for iced coffee and any other cold drink where a liquid sweetener mixes in better than granulated sugar. It's also a better way to sweeten your favorite coffee drinks since you know exactly what's in it and it costs pennies to make.

How to Make Cinnamon Simple Syrup

Bring a cup of water to a boil in a small saucepan over medium heat.

Add a cup of sugar and stir until the sugar dissolves.

Pour the syrup - including the cinnamon sticks - into a glass, airtight container.

Store in the refrigerator for up to 3 weeks.

How to Use Cinnamon Simple Syrup

Can I use ground cinnamon?

Skip the ground cinnamon for this syrup. It’s difficult to remove from the syrup and leaving it in will cause the syrup to continue to intensify in flavor over time. This makes it difficult to gauge how much cinnamon syrup you’ll need in a recipe and will lead to the cinnamon flavor overwhelming the other ingredients.

What can I use instead of white sugar?

Using a different type of sugar will change the flavor of this syrup. If you’re looking for a different flavor to enjoy with the cinnamon, try brown sugar or honey in this recipe instead of the white sugar. 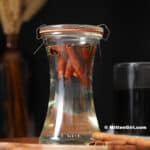 This easy cinnamon simple syrup recipe is the perfect addition to your morning coffee or shaken into a holiday cocktail.

Bring water to a boil in a small saucepan over medium-high heat.

Add sugar and stir until sugar has dissolved.

Remove from heat and add cinnamon sticks. Allow the mixture to cool to room temperature.

Pour syrup - including cinnamon sticks - into a glass, airtight container.

Store in the refrigerator for up to 3 weeks.

Join my email list and get 5 CLASSIC COCKTAIL RECIPES sent to you immediately!